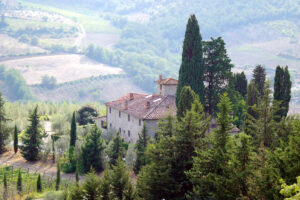 Villa Vignamaggio is a charming restored renaissance villa just outside the town of Greve in Chianti. It’s a beautiful location, is exceptionally photogenic and they make great wine… what more could you ask for? How about also being the birthplace of perhaps the most famous portrait sitter ever: Mona Lisa ? The owners of Vignamaggio crowned the exceptional qualities of their property with the claim that their villa is the birthplace of Leonardo da Vinci’s Mona Lisa — an assertion that I have repeated on this website. The history of that part of the world and the information provided by Vignamaggio on its chain of ownership appears to back up the assertion. However, there’s just one problem: it isn’t true.

In the past few years, Vignamaggio has backed off from their birthplace claim and now says “Legend has it that Lisa Gherardini spent a lot of time at Vignamaggio” So what exactly is going on here?

Recent research led me to the English translation of an Italian book, “Mona Lisa Revealed” by Giuseppe Pallanti. Mr Pallanti set out to connect the life of the model (Lisa Giocondo, nee Gherardini) with the painting, and the result is a fascinating book that provides a clear, vibrant glimpse into the world of renaissance Florence and the life of Lisa Gherardini, her husband Francesco del Giocondo (a wealthy silk merchant), Leonardo da Vinci and his father Piero. It is impeccably researched, using Florentine medieval tax returns and registers of births and other official documents. And this is where the birthplace claim of Villa Vignamaggio parts company with historical record.

Lisa Gherardini was born in Florence on 15 June 1479 in a house on Via Maggio, and not at Vignamaggio as the villa owners claimed. This is recorded in the grandly titled Archivio dell’Opera di Santa Maria del Fiore di Firenze “Battesimi” (baptismal record) for 1457-1491. Could confusion between Via Maggio and Vignamaggio be to blame? Perhaps, except that 57 years previously in March 1422, the Gherardini family had sold Vignamaggio to the Gherardi family. This is recorded in the Florentine tax records, the “Catasto” — a kind of medieval 1040 tax return. Despite the similarity of names, it was Lisa Gherardini who later married Francesco del Giocondo and who eventually sat for Leonardo .

Giuseppe Pallanti, author of the book, was born in Greve — the closest town to Vignamaggio — and goes out of his way in the text to document the chain of ownership of Vignamaggio, even though it is peripheral to the story of the Gherardini family. His book shows that he knows the Greve area well, and I’m sure he has been to Vignamaggio; my guess is that this is his way of obliquely refuting the villa owners’ claim.

So, what are we to make of all this? A bit of embellishment where non was required: Vignamaggio is a beautifully restored villa in a superb location, is supremely photogenic and makes great wine — and good olive oil, too. Mr Pallanti’s book was published in 2006, seven years after I first visited the villa and many years after the current owners bought it, so perhaps there was some legitimate confusion. Regardless, I love to visit and I’ll be going back in the future.

Final post script: Pallanti’s book is very convincing that Lisa Gherardini was the sitter but there was still some wiggle room for alternative theories. Shortly before the book was published, an academic at the University of Heidelberg discovered a note scribbled in the margin of a medieval ledger that is contemporary with the time of the painting. It positively identifies the sitter as Lisa Gherardini, wife of Francesco del Giocondo: the true Mona Lisa after all.