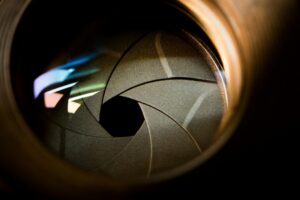 Photography is fundamentally about light. Any photographer needs to understand how to control how much light gets into the camera and onto the sensor or film, which is known as exposure.

A photographer also needs to understand the terminology of exposure in order to be able to reason about it and make artistic choices, because there are many equivalent exposure settings that will let in the same amount of light but result in very different photographs.

Exposure is about collecting the right amount of light on your camera’s sensor. It’s like filling up a glass with water. There are two main controls: aperture (how fast the water pours into the glass) and shutter speed (how long you pour). You might also have heard of ISO in relation to expsoure: we’re going to ignore it for the moment, because it has absolutely nothing to do with how much water goes into the glass.

Hopefully you can immediately see that you can take different strategies to fill the glass with the same amount of water: a strong “firehose” of water for a short amount of time, or a slow trickle for a longer period. Both fill the glass to the same level, but when it come to light entering your camera there are practical and artistic reasons for choosing one over another.

Your digital camera body is basically a light-tight box containing a sensor and a shutter. The shutter is a mechanical device that opens and closes automatically to allow light to shine on the sensor for some time. Tiny cameras like the one in your phone use electronics instead of a mechanical shutter to save space, but the principle is the same.

The amount of time that the shutter is open is called the Shutter Speed and is expressed in seconds. A shutter speed of 1/125th means the shutter opens and then closes 1/125th of a second later. Because photographers don’t like repeating themselves, they drop the “1/” part of the fraction and call that “a shutter speed of 125”. If you want to talk about a shutter speed of 2 seconds, you literally have to say “2 seconds” otherwise they’ll think you mean ½ a second.

It’s pretty easy to see that doubling the shutter speed halves the amount of time the shutter is open: so going from 1/125 to 1/250 means half the amount of water makes it into the glass. The notion of doubling and halving is very important in exposure. To the human eye, brightness is not linear — a doubling of light looks a bit brighter to the eye, a halving a bit darker. So in photography we use doubling and halving of light as the way to measure exposure.

The aperture setting is called the “F number” or “F stop”. When you’re just starting out in photography you can just accept that F numbers seem somewhat counter-intuitive and not worry about why F numbers are the way they are. If you really want to know, there are articles that explain the math behind them.

Let’s look at a table of F numbers to see how much light they represent:

The final terms you need to know around exposure are “stops” or “exposure value”. You might hear a photographer talk about “increasing exposure one stop”, which means doubling the amount of light getting into the camera. The photographer might choose to do that by decreasing the shutter speed one stop (e.g. from 1000 to 500), or by changing aperture one stop (e.g. from f/5.6 to f/4). Or any other pair of changes that maintain the same exposure. You might also see that referred to as “+1 EV” which means increasing the exposure value by one (stop); -1 EV means reducing exposure by one stop, and so on.

This is perhaps the driest part of photography, but it’s also important if you are to control light to create the artistic effect you desire. The next articles explain how you can use aperture and shutter speed for artistic purposes.