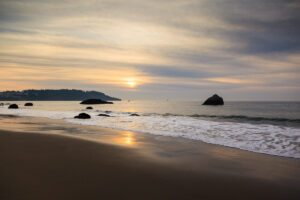 Artistic use of exposure: light, space and time

The previous article talked about exposure in the sense of controlling how much light hits the camera’s sensor, and how shutter speed and aperture can be used to control the amount of light. This article explores how they can be used for artistic purpose.

There are three fundamental artistic controls that a photographer can use to create the image they want: light, space and time.

Light refers to the amount and placement of light within an image. Humans are drawn to light: the viewers attention will move towards the lightest part of an image. Where you place the light in the image also triggers strong emotions and cultural associations. We regard diffuse light as ethereal and other-worldly, or to signal positivity (“light versus dark”), for example.

Space refers to the layering of the image: where are the various image components or objects in relation to one another? How does the use of space lead the eye through the image on a particular path leading to the focal point? Placing a winding brick road in the foreground leading up to a spectacular gothic castle is an example of the use of space to tell a fantastical story about the castle, and possibly signal associations with famous castles in literature.

Time refers to depictions of time in a still image. Think of athletes frozen in time as they cross the line or make a world-record jump, their faces contorted with effort. Or a waterfall with a long exposure that turns the splashing water into a soft white frothy mess triggering an ethereal or otherworldly association. Or a race car, in-focus and razor sharp so we can see the sponsors’ logos but with the road markings fuzzy and streaked which we interpret as movement.

We’re going to think about shutter speed and aperture as tools that can serve one of two purposes, like a switch.

Much of the time, if we decide to use one of these two controls for artistic purposes, the other control must be used to control exposure (light). We can only use both at the same time if conditions permit, or we have total control of the light – such as in a photographic studio with sophisticated lighting.

To blur a waterfall, you might use an exposure of a few seconds – enough time for the splashing areas to blur, but not so much that they become featureless.

To communicate motion, you need a shutter speed that is slow enough that panning the camera creates the streaked background you need, but fast enough that you can get a razor sharp main subject while the camera is moving. It’s important to viewers that the subject be in clear focus.

If we’re shooting in available light (e.g., sunlight), then using shutter speed to control time means we have to compensate with aperture. So when trying to freeze a water splash we’re wide open on aperture so that the 1000th of a second shutter speed still results in enough light making it into the camera.

Aperture can be used to control Depth Of Field (DOF) – what’s in and out of focus in the image. However, depth of field depends on three variables: distance to the subject (focus point), focal length of the lens, and aperture. The most important is distance to the subject. Get close enough and aperture can be used to control how blurry items are in front of and behind the focus point. So you can make the background disappear entirely – to isolate the subject – or blur it just enough that it provides context to the image by being recognizable but not competitive with the subject.

In available light, going in close and using aperture for depth of field means that shutter speed has to carry the load of ensuring the image is exposed correctly, typically by increasing shutter speed.

In this photograph a high shutter speed (1/2000th) is being used to freeze the action from the ice cubes being dropped into the water. Aperture is F4.0 to compensate — and this photo was also taken outside in direct sunlight.

In this image aperture is used (along with focal length) to reduce the depth-of-field. DOF is used to separate the grass in the foreground from the background. By using just enough blur, we can still see that it’s a fence (providing context for the image) without it competing with the foreground subject.

Photographers control light, space and time as tools to reliably elicit a response from the viewer